How to keep away mosquitoes carrying Zika, dengue

By Carina Storrs, Special to CNN 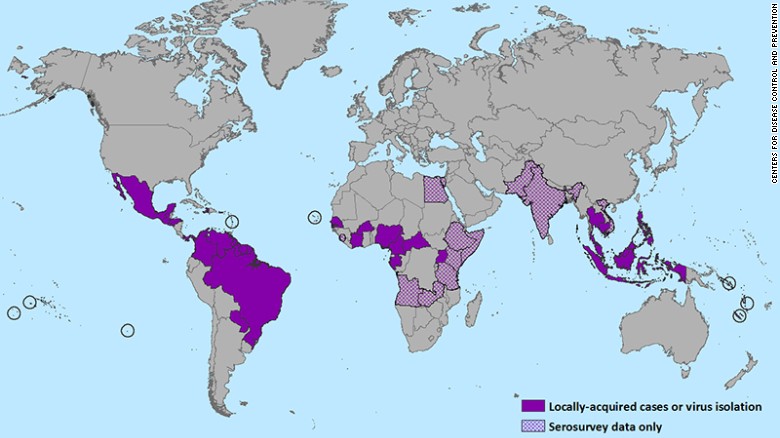 (CNN)When Zika virus made headlines because ofits link with the neurological disorder microcephaly, it became the latest in a growing list of mosquito-borne viruses for Americans to worry about.

"Dengue, chikungunya and Zika are the ones that I'm very fearful of for the Gulf Coast states [such as Florida and Texas], and Zika is the most terrifying of all because of the horrific birth defects," said Dr. Peter Jay Hotez, dean of the National School of Tropical Medicine at Baylor College of Medicine.

There have been severaldengue outbreaksin Texas, Florida and Hawaii over the last several decades. These infections can escalate to the point of causing severe pain, bleeding, shock and death.

Florida, Puerto Rico and the U.S. Virgin Islands have seen pockets of chikungunya in the last couple of years. It often afflicts the infected with debilitating joint pain.

Another mosquito-borne virus, West Nile, is everywhere in the United States, Hotez said. "It causes more severe disease like chronic kidney disease and neurological problems than people realize," he added.

"Unfortunately, we do not have good antiviral drugs for any of these [viruses]. That makes prevention even more important," Hotez said. Although a dengue vaccine was recently approved in Mexico, there are no vaccines against this so-called breakbone fever, or other mosquito-borne viruses, in the United States.

For Zika, prevention comes down to avoiding areas where the virus is spreading. To date, all the cases of Zika in the United States have been in people infected while traveling. The Centers for Disease Control and Prevention issued an advisory this month for pregnant women to "consider postponing travel" to Mexico, Puerto Rico and many other countries with Zika, because of the connection between viral infection and babies born with microcephaly, which causes small heads and developmental issues.

However it is not possible to entirely avoid dengue and chikungunya in the United States.

The Southern United States, and especially the Southeast, faces the biggest threat. Aedes aegypti, the type of mosquito that can spread dengue, chikungunya and Zika, lives in this region, as well Central and South America, Africa, Australia and South Asia. Another type of mosquito, Aedes albopictus, can also transmit these viruses and is more widespread in the United States, but is less of a threat because it does not feed on human blood as frequently and lives in less close contact with people. The Culex mosquitoes, the main vector for West Nile virus, are found all over the United States.

The good news is that all these viruses can be avoided by taking measures to prevent mosquito bites, which pass the viruses in their saliva. Whether it is the Aedes or the Culex, steps such as wearing insect repellant can stop them in their tracks.

What you can do at home

Americans can take a break from worrying about diseases from mosquitoes in the winter because Aedes and Culex mosquitoes are not active when it is cold, said Laura D. Kramer, professor in the School of Public Health at the State University of New York at Albany. But that break can be short-lived in places like the South. "As soon as it heats up [to 50 or 60 degrees Fahrenheit], mosquitoes will come back and viruses can replicate in them," Kramer said.

You are more likely to encounter Culex mosquitoes, which can carry West Nile virus, outdoors and at night. But you are at higher risk of bites from the Aedes mosquitoes, which can spread dengue, chikungunya and Zika, inside. That is because Aedes are active and feed during the day. "They come in the house for shade ... they live very close to people," Kramer said.

Fortunately, most people in the United States close their windows when it's hot and crank up the air conditioner. That probably goes a long way to reduce the risk of Aedes mosquito bites. The fact that people in Key West tend to keep their houses open probably worsened the dengue outbreaks in south Florida, Kramer said.

One of the most important things to do when the weather warms up is make sure you don't have standing water outside your house, such as in a garbage can lid, birdbath or trays of potted plants, Kramer said. Anything sitting around for more than five to seven days can be a breeding ground for mosquitoes, she said. (Properly chlorinated swimming pools deter mosquitoes.)

Kramer recommends dumping standing water at least once a week on dry ground -- any larvae in the water will die when the water evaporates and they dry out. You can also take a look at standing water to make sure it does not contain mosquito larvae, which are visible to the naked eye.

Many households hire exterminators or invest in misting systems that spray pesticides outside the house. This can be a temporary fix, at least for Culex mosquitoes, which buzz around outside the home, but not for Aedes, which are much more likely to be indoors, Kramer said. And even for Culex, if there are nearby houses where they can breed, "new mosquitoes will quickly repopulate [your] house," Kramer added.

It may provide more lasting relief from Culex mosquitoes for an exterminator to spray outside all the houses in an area, Kramer said. However, it could be less useful when trucks, such as ones that municipalities hire, spray around neighborhoods if the pesticide does not reach the standing water and areas around homes where mosquitoes breed.

The U.S.Environmental Protection Agencyand CDC recommend taking a combination of approaches that includes eliminating standing water, and that could also include an outdoor misting system. However, there has not been enough research to know if the misting systems are effective at controlling mosquitoes and other insect pests, and they might end up killing butterflies, bees and other beneficial insects. In addition, the agencies warn that pesticides could pose human health risks if too much is used or they build up in the environment.

What you can do when you're outside

There are a number of other important steps to stave off mosquitoes when you are outside. Covering your skin with a long-sleeved shirt, pants and hat is classic advice, but it's not always realistic when it's really hot out, Kramer said.

Wearing insect repellant is also key. The CDC recommends using a product with EPA-registered ingredients, such as DEET or picaridin, and reapplying according to the instructions on the label or if the bugs start biting. These products are safe for pregnant women and children,according to the CDC, but care should be taken not to get repellant in the eyes or mouth and adults should apply the product for children.

Pregnant women might still want to talk with their obstetricians before using insect repellant, Hotez said. "There's conflicting accounts. Some people say it's safe to use, others say it hasn't been studied enough," he said.

If you do wear repellant, Hotez recommends a couple of tips for use. Apply just enough to cover exposed skin and don't wear it under clothes, because it does not evaporate and accumulates on clothing. It is also important to put it on after sunscreen; do it the other way around and sunscreen could mask the repellant.

You can also go one step further and wear clothing that contains permethrin, which is a synthetic insecticide that started showing up in consumer products in 2003. These products have been tested by the EPA and determined to be effective at deterring pests, and safe for children and women who are pregnant or nursing.

What you can do when you travel

The first step to avoid mosquito-borne viruses when you travel is topay attention to travel alertsand avoid areas where there are outbreaks. But don't let your guard down just because there is no alert.

"The CDC only recommends areas [known to be] affected by Zika, but I'm also worried about other areas of the Caribbean. I think we have to assume that all of the Caribbean is going to be affected, it's just not being looked at yet," Hotez said.

In fact, most parts of the world have had cases of some of these mosquito-borne viruses, from Central and South America to Africa, Asia and southern Europe. In all these places, you should take the same precautions you would at home and wear insect repellant and cover your skin if you spend time outside where there are mosquitoes.

Another way to protect yourself is to stay in hotels and houses that have air conditioning, Kramer said. Many of them do, and this is a good sign that they won't keep windows and doors open.

It also doesn't hurt to take some of the precautions that you follow at home on the road with you. For example, look around where you are staying to see if there is standing water in flowerpots, and if the windows are open make sure there are screens in them, Kramer said.