Plenty of people have described Hurricane Harvey as a disaster of biblical proportions, and it seems the next plague is upon the US. It isn't locusts. Thanks to untold quantities of filthy standing water, millions of mosquitoes are starting to hatch. And yes, they do bite. They love to bite. 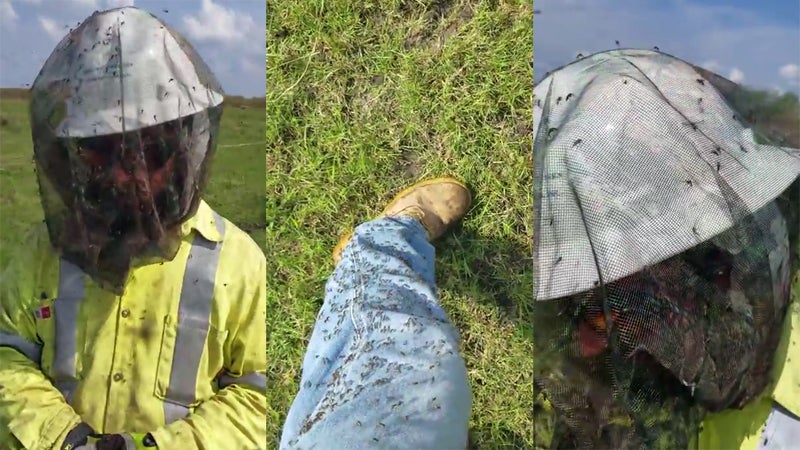 A little bit of itch isn't what folks in Texas are afraid of, however. Public health officials warn that the surge in the mosquito population caused by the flooding could lead to a spike of mosquito-borne illness. As the US Centres for Disease Control explained in a recent advisory, the mosquito population increases dramatically after a major flooding event as dormant eggs hatch. These so-called floodwater mosquitoes are a different breed than those that would typically carry dangerous diseases, however.

Considering these images, calling these bugs a "nuisance" seems like an understatement. Dr Charles Allen, an associate professor of entomology at Texas A&M, uses more colourful language to describe the behaviour of the post-flood mosquito populations. They are definitely rude little bastards, but for now, they're probably not deadly.

"There will soon be a lot of mosquitoes and they will be very noticeable, because of their sheer numbers and because they are vicious biters," Dr Allen said in a press release. "It's important to realise though that as unpleasant as these will be, they are not a species that typically transmits disease. So at least in the short-term, it's not a Zika issue and it's not a West Nile Virus issue."

Over time, the threat of West Nile and Zika will unfortunately come back, and it might do so with a vengeance. West Nile, specifically, is a concern. The virus has been in Texas at least since 2002, and last year, there were 370 recorded cases. And while the floodwater mosquitoes will be a conspicuous pain in the arse for the next few weeks in the areas affected by Harvey, the more dangerous mosquitoes will eventually come back, perhaps with a vengeance. For instance, after Hurricane Katrina in 2005, the West Nile Virus wasn't a major problem for New Orleans, but the following year saw twice as many cases in the area than were recorded before the storm.

Texans can do their best to temper the mosquito explosion for now by eradicating any standing water that could become a breeding ground. Otherwise, it's a good idea to wear long sleeves and pants. A good douse of DEET will also help. If all else fails, just stay inside and keep the windows closed. Because based on the images coming out of Texas, the mosquitoes will find you when you go outside. And they will bite you.