Mosquito-borne diseases are infectious diseases that are spread by the bite of infected mosquitoes carrying the pathogens. They include Zika virus, West Nile virus, Chikungunya virus, dengue, and malaria. Mosquitoes are among the vectors that transmit more than one in seven infectious diseases, causing around 700,000 deaths a year.

The mosquito is named from the Spanish word meaning “small fly” and belongs to a group of around 3,600 species of small flies within the family Culicidae. All female mosquitoes have a tube-shaped sucking-piercing mouthpart (proboscis) through which they draw blood from the skin of the host in order to use the vitamins it contains for their egg production.

Mosquitoes typically feed on vertebrates but with species-specific preferences for humans or certain animals. They home in on their warm-blooded hosts via body odors, carbon dioxide, or the heat map of the individual, with different times of feeding, as well as varying resting places and habitats.

When drawing the blood meal, the mosquito’s saliva is injected into the skin since it prevents blood clotting and thus allows the mosquito to withdraw its proboscis once feeding is done. This is via anticoagulants and anti-inflammatory substances, which provoke the host immune system to release histamine and other signaling molecules. These are responsible for the itching and red raised wheals at the site of these bites.

In the workplace, employers are responsible for protecting their workers, but workers should also take precautions when working in places where they may be bitten by mosquitoes, depending on the time of day and the season.

Outdoor workers, travelers who go to areas prone to mosquito-borne diseases, and laboratory or healthcare workers exposed to potentially infected patients, samples, or insects should take care to avoid being bitten. Employer-initiated protections include avoiding stagnant water in open containers and other objects that collect water, clearing out ditches that carry water, and screening doors and windows or keeping them closed during the hours when mosquitoes are active.

The employees should also receive training to prevent bites, recognize mosquito-borne diseases, and use insect repellents safely. The use of long-sleeved shirts and long pants, along with an insect repellent, during outdoor work in mosquito-infested areas, is also recommended.

Mosquitoes of different species carry a number of serious diseases. 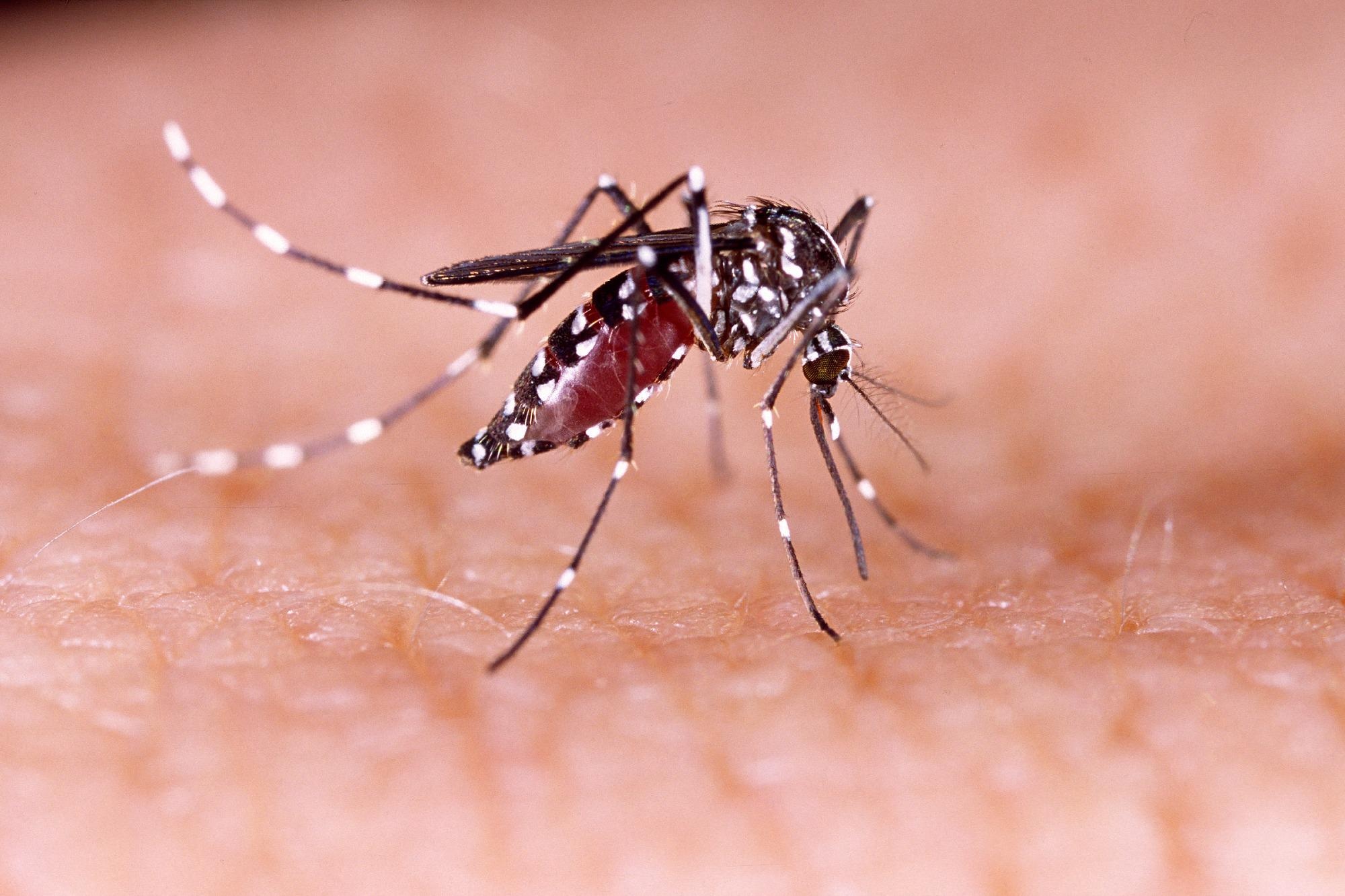 Malaria is the most dangerous and prevalent infectious disease today, caused by the parasite Plasmodium. The pathogen is transmitted by the Anopheles species of mosquitoes. The disease, which causes about 220 million cases worldwide, and more than 400,000 deaths annually, affects 40% of the world’s people.

Malaria presents with fever, headache, and chills at about 10 days to two weeks from the entry of the parasite. Two-thirds of the cases are in children <5 years of age. Most cases still occur in Africa, where more than 94% of malaria deaths are recorded.

Cerebral malaria is the deadliest form, with almost 20% mortality but up to 50% in pregnancy. Anemia due to the red cell destruction by the malarial parasites can cause death in up to 13% of patients. Among cerebral malaria survivors, over 575,000 will continue to have neurological and intellectual deficits, seizures, and behavioral defects.

Plasmodium belongs to one of five species. Of these, P. falciparum is the deadliest and causes most infections in Africa. It is capable of causing death within as little as one day. P. vivax is responsible for most cases outside sub-Saharan Africa.

Pregnant women, patients with human immunodeficiency virus (HIV) infection or acquired immunodeficiency syndrome (AIDS), children under five years, and others without robust immunity who move into places with high malaria transmission are at increased risk for malaria.

Vector control, including spraying indoors and using insecticide-treated nets, is a key intervention, while another is chemoprophylaxis, seasonal malaria chemoprevention and mass drug administration. The World Health Organization (WHO) also recommends the RTS,S/AS01 malaria vaccine in areas of significant malaria spread.

Dengue has the dubious distinction of being the most common vector-borne viral infection in the world, and among the top causes of death in tropical and subtropical regions. It is caused by the dengue virus, carried by Aedes mosquitoes. The at-risk regions for this potentially lethal infection are inhabited by approximately 4 billion people, scattered over almost 130 countries.

Almost 96 million individuals fall sick with dengue each year, of whom around 40,000 die. Dengue fever manifests with high fever, headache, joint pain, and rash. A striking and often fatal complication is dengue hemorrhagic fever, with low platelet counts and internal bleeding and breathing issues. Like the Zika virus, the yellow fever virus and the West Nile virus, dengue is a flavivirus, with four types having been identified so far.

An alarming trend is the rising incidence of this infection with extension into previously untouched regions. A vaccine has been developed but increases disease severity in those exposed to the virus post-vaccination for the first time, necessitating prior screening.

Yellow fever is characterized most often by fever, headache, muscle pain and nausea in the small proportion of symptomatic infections. While initially resembling malaria, some infections turn severe, with bleeding from the mucosa of the mouth, nose and eyes; jaundice, which causes the yellowing of the skin and eyes that gives this condition its name; and death in about half of these cases.

The virus circulates as an endemic pathogen in Africa and South America, with outbreaks occurring when the virus is introduced into a naïve and crowded population living in a location with plenty of mosquitoes, as seen in Africa.

A yellow fever vaccine is available, but supply shortages prevent effective vaccine rollouts during an outbreak.

Zika virus is a pathogen that has only recently been recognized. Initially causing only mild disease with some fever, joint pain, and rashes, it is dangerous in pregnancy because it damages the developing fetal brain, causing neurological defects. A common and characteristic seen in these situations is microcephaly, sometimes fatal but more often causing mild-to-severe developmental issues.

Zika virus spread into a naïve population in the Americas, causing high infection rates in Brazil and spreading thereafter throughout the continent. In the US, it circulates in Florida and Texas, for the most part.

Chikungunya virus infection is important mainly because of the severe and debilitating sequelae, especially joint pain lasting for weeks or months. During the acute infection, it produces fever, pain and rash. At present, it affects tropical Africa, Asia and Europe, with scattered cases in the USA.

Since the mosquitoes involved in this infection bite during the day, those who sleep during this time should use insecticide-treated mosquito nets, while rooms should be fitted with screens to keep out mosquitoes.

Unlike many other mosquito-borne viruses, a safe and effective vaccine exists to safeguard against yellow fever. The challenge is to vaccinate people in the affected regions swiftly enough to contain the spread and maintain sufficient stockpiles of the vaccine so that enough is available during an outbreak; it takes about 12 months to produce additional doses.

The West Nile virus was discovered in 1937 in Uganda, a country in eastern Africa. In 1999, an especially deadly strain of the virus originating in Israel and Tunisia infected New York City, triggering a huge outbreak across the U.S.

While the infection is asymptomatic in over 80% of people, it can cause fever, pain, and nausea, while <1% develop the feared complication, West Nile encephalitis. This can be fatal. The virus is spread by mosquitoes that acquire the virus when feeding on infected birds, but not humans.

Among birds, particularly crows, infected with the circulating variant are fatal, so their deaths signal an upcoming outbreak in the USA. Like humans, horses carry the virus, but they do not transmit it.

The JE virus causes about 68,000 cases of encephalitis in Asia every year. Most cases are mild, with fever and headache, or asymptomatic.

However, 1 in 250 cases has severe symptoms. As many as a third end in death, and up to half the survivors are left with permanent brain damage or psychiatric issues. Over 3 billion people are exposed to a risk of JE.

The live attenuated SA14-14-2 vaccine is widely used in endemic countries, others being cell-based inactivated and live recombinant vaccines.

This disease, termed elephantiasis, is caused by the filarial worm, Wuchereria bancrofti, in 90% of cases, or Brugia malayi.

Mosquitoes of all three genera ingest blood containing the microfilariae larval forms of the worm from infected hosts. These are deposited on the skin of the next victim to enter the body and travel to the lymph vessels. There they mature into adult worms to clog the lymphatic channels and prevent the recirculation of lymph in the lower extremities as a result.

Over time, the affected individual develops massive thickening of the skin and subcutaneous tissue because of the swelling produced by the backed-up lymph, complicating infections, irritation, and itching.

The disease can also affect other body parts such as the scrotum or the breasts. The result always being lymphedema. Acute inflammatory episodes are common due to secondary infection by bacteria or by the immune response to the parasite.

The outcome in all these cases is pain, severe permanent disability, and social ostracism. Prevention is by chemotherapy, taken annually. Such campaigns have reduced the global caseload by three-quarters since 2000, but 50 countries, comprising almost 860 million people, remain at risk for this devastating disease.